Robust growth in the U.S. ahead 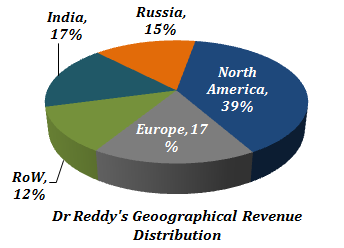 In FY 2013, the Company’s revenue from North America increased by 46 % over the previous year to Rs. 3,784.60 Cr. This growth was primarily due to a continued focus on gaining market shares for new products such as atorvastatin, metoprolol, ibandronate and montelukast granules. The Company aims to scale up its business in the U.S. market on the back of a strong product pipeline.

Over the Counter (OTC) market in India was worth about US$1.8 billion in 2009, and PwC estimates that by 2020, it will grow to US$11 billion – a CAGR of 18 %, with the potential to reach US$13 billion– at an aggressive CAGR of 20 %. The Company is working to strengthen its OTC product basket further, which contributed around US$100 million for FY2013, almost 25 % to the Company’s overall sales. The Company’s market share on Metoprolol (generic Toprol- XL) has increased to 15 %. Total market for Metoprolol is still large at US$450 million and, therefore, a doubling of the market share is significant for Dr Reddy’s. Due to significant launches in late FY14, growth in the US is likely to be stronger in FY15 in comparison to FY14.

In order to tap the emerging market opportunities, Dr Reddy entered into an alliance with GSK in FY2011 to develop and market more than 100 branded formulations on an exclusive basis across an extensive number of emerging markets, excluding India. On the biogeneric front, the Company has developed nine products (four products launched in India) on mammalian cell culture with global brand sales of US$30bn.

The Company has also entered into supply agreement with JB Chemicals for manufacture and supply of products associated with acquired brands. As per the agreement, the Company would acquire 20 brands from JB Chemicals including key brands Metrogyl and Jocet. Dr. Reddy’s Laboratories Ltd and Merck Serono, a division of Merck KGaA, Darmstadt,Germany, has also announced a partnership to co-develop a portfolio of biosimilar compounds in oncology, primarily focused on monoclonal antibodies (MAbs).

The Government of India is currently in the process of introducing a change in the manner of pricing drugs in the country. It has announced the draft National Pharmaceutical Pricing Policy, 2012 (NPPP), to put in place a regulatory framework for drug pricing. The list of drugs proposed to be regulated by this policy is based on the importance of drugs as contained in the National List of Essential Medicines (NLEM). There are genuine and universally shared concerns within all sections of the industry that its implementation could not only impact the availability of ‘essential drugs’ but also affect the competitive dynamics in the Indian pharmaceutical market. The Government of India may make certain formulations and drugs cheap which may put pressure on the profit margins of the Company.

Food and Drug Administration (FDA) in the United States has been increasingly scrutinizing Indian pharmaceutical companies finding concerns with the quality of the medicines. Recently the FDA imposed a ban on Ranbaxy and Sun Pharmaceuticals Limited for not meeting their quality guidelines.

India is the second largest exporter of drugs to the U.S. market after Canada and supplies 40 % of drugs consumed by the U.S. market. FDA and even the U.S. doctor are becoming concerned about the quality of generic drugs supplied by Indian manufacturers. Dr. Reddy is also in the process of recalling about 58,656 bottles of the heartburn drug Lansoprazole in the United States due to a microbial contamination. More stringent measure will impose more challenges on Indian pharmaceutical industry.

** The stock analysis of Dr Reddys Laboratories Limited including the financial report linked above, is for informational purpose only.  This analysis should not be taken as a buy/sell recommendation. The circumstances of the company and the economic environment may have changed since the date of this stock analysis.