The factors considered below present an overview of the oil & gas sector in India in general and stock analysis of ONGC in particular. For a financial report, visit here – ONGC

For financial year 2013, Oil and Natural Gas Corporation (“ONGC” or “Company”) reported a healthy 10.24 % jump in its turnover over the previous year despite worsening economic conditions for most part of the year. ONGC commands a major share of ~69 % of the domestic crude production and 62% of natural gas production in India. ONGC’s robust infrastructure and strong capabilities in the field of exploration, production, transportation and processing have enabled it to become a leader amongst the oil and gas sector companies in India.

ONGC has large 1P* and 2P* crude oil and natural gas reserves base of 963.86 metric million tons (MMT), and 1,426.3 MMT, respectively.  ONGC’s total exploratory area of ~ 6.2 lakh km in India and abroad reflects it growth potential for oil & gas production in future. ONGC’s aggressive expansion plans over the next 2-3 years and new fields which are being acquired would further help the company in strengthening its position amongst the oil and gas sector companies in India.

Rising middle class and increasing urbanization in emerging economies like India will continue to drive energy demand of the kind that offer immense opportunities for oil and gas sector companies. As per World Energy Outlook 2011, India’s total primary energy demand is expected to grow by a CAGR of 3.1 % in the period 2009-2035. Oil demand is expected to grow by 3.1%, gas by 4.5 %, renewable (excluding biomass & waste) by 12.2 % and nuclear by 9.2 %.

According to India’s oil ministry’s estimates, India’s energy demand is expected to more than double by 2035, from less than 700 million tonnes of oil equivalent (MT) today, to around 1,500 MT. While ONGC has already registered its presence in all these emerging growth areas, we believe that improvement in ONGC’s production is crucial for India which is  world’s fourth largest energy consuming nation, which imports as much as 80 % of its crude oil and 25 % of its natural gas requirements. 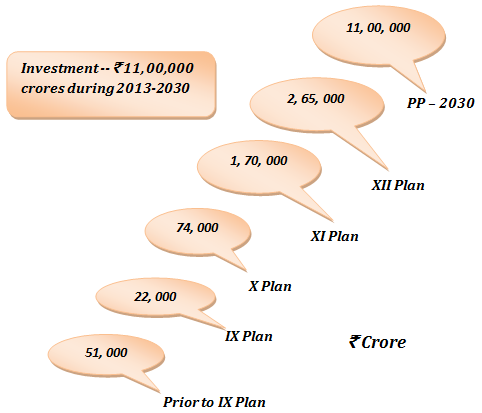 ONGC has planned an expansion program to be completed by 2030. According to ONGC’s Perspective Plan 2030, the Company aims to unlock more than 450 million tonnes of oil and oil equivalents. The Company is targeting production of more than 130 MT in 2030, of which half will come from assets owned by its overseas subsidiary ONGC Videsh Ltd (OVL). OVL would be looking to explore investment opportunities in around 4-5 international hubs where the entity could achieve adequate growth and source 60 million tonnes of oil and oil equivalents per year by 2030.

In FY 2013, ONGC’s subsidiary Mangalore Refinery and Petrochemical Limited (“MRPL”) announced its intention to increase capacity to 21 MMT from the current capacity of 12.82 MMT by 2021. In FY2013, ONGC also entered into city gas distribution business and sale of imported liquefied natural gas (LNG) through a new subsidiary – ONGC Gas Ltd.

Production from ONGC Videsh Limited (OVL), ONGC’s overseas exploration arm, is expected to reduce because of uncertainty in Syria and Sudan, which account for 23 % of OVL’s production abroad. The output at Syria has already fallen due to sanctions imposed by the European Union on the country’s oil exports. Production has fallen from 80,000 barrels per day (BPD) to 20,000 (BPD). OVL has a 13.5 % share in the produce from these assets. Differences between North and South Sudan have resulted in a decline in production from 130,000 BPD to 60,000 BPD. OVL has a 25 % share of the production.

* 1P: proven reserves ofare those reserves claimed to have a reasonable certainty (normally at least 90% confidence) of being recoverable under existing economic and political conditions, with existing technology.

* 2P: Probable reserves are attributed to known accumulations and claim a 50% confidence level of recovery. Industry specialists refer to them as “P50” (i.e., having a 50% certainty of being produced).

** The stock analysis of ONGC  including the financial report linked above, is for informational purpose only.  This analysis should not be taken as a buy/sell recommendation. The circumstances of the company and the economic environment may have changed since the date of this stock analysis.