Al started investing in stocks in 1963 with an initial investment of US$ 4,000. By the year 1999, his portfolio value had reached US $14 Million. He has given close to US $8 Million of his wealth to charity.

I got to know Al in 2006 when he delivered a lecture at NYU about stock investing. In a big way, I credit that lecture for getting me started in stocks.

That was 9 years ago. Today, I met him again at his apartment in New York. The email I received from him was concise stating only his address with this one additional line – “By the way, when you come over, do not expect my place to look like the home of a multi-millionaire. It is the same little flat I have had since I was a law student.” He pays a rent of under US$ 900 for his apartment.

Al holds a degree in government from Cornell, with emphasis on foreign affairs, was the Graduate Fellow of the Committee on International Relations at the University of Chicago, and received a law degree from NYU. In addition to being an investor, Albert Podell has had successful careers as an editor, director of photography, freelance writer, advertising creative director, ad agency VP, good-government lobbyist, trial attorney, producer and director of feature-length music videos, and (much less successfully) theatrical investor and producer. As an attorney, AL never lost a jury trial in 32 years.

He has been an editor at Playboy and several outdoor magazines, reviewed books for the Chicago Sun-Times and has published more than 250 magazine articles, mostly on adventure. He was the co-leader of the successful Trans World Record Expedition and co-author of “Who Needs A Road”, an adventure classic still in print after 48 years. He has travelled to all 196 countries in the world. Yes – every country on the planet. His new book, Around the World in 50 Years, will be published March 24 by St. Martin’s Press. Click on the image below to go to his book page. 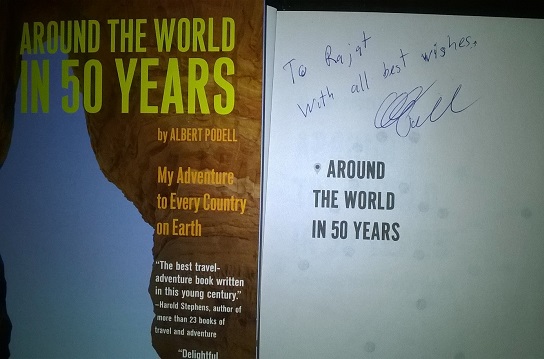 Al does not use, rather does not know anything about charting tools, software or any other system of electronic trading. He has not found any of his stocks through a newsletter or through a stock advisory service. About his basis of stock selection, Al comments – “Just walk around with your eyes open and think of everything as an investment option, if you see something interesting, research well.”

He recalls – “when contraceptive pills first came out, all my girlfriends were talking about it. I studied the market and the companies manufacturing those pills. Instead of buying any of those stocks, I invested in Syntex – a company which had the patent for extracting a certain type of hormone from sweet potato grown in Mexico. This was the hormone used in all contraceptive pills. Over the next few years my investment in Syntex multiplied many times over.”

“I look for stocks that have the potential to double in a year and for many years to come”. They should have:

Al has found more than 15 companies based on these principles. His biggest gain has been 345 times the value of his initial investment over a span of 17 years.

Note: I do not endorse (or reject) the basis of selection above. I do however find it fascinating. You may choose to agree or disagree.

I asked him if he considers himself as an investor or a trader. This is what he had to say – “About 95% of my investments are in long term stocks. I do trade with some of my money but not a lot. As an investor, my time frame can be many years, and until the stock has lost the ability to increase in value at least 40% a year.”

Al has made a lot of money trading stocks too. He however cautions – “to be successful at trading, you should not have concern about losing your money. That will change your temperament. You cannot trade with money you need to pay house rent with.”

Interestingly, the word he used for old school value investing was – BORING.

On the subject of dealing with losses or investing in stocks that fail to deliver desired return, he commented – “please recognize that losses are an inescapable part of an investor’s life. Try to make up for the losses by maximizing gains on other stocks. I have owned large positions in at least seven companies that have gone bust. Totally worthless! Some where I lost as much as four million dollars from their high. But, as I said, you try to learn from these disasters and move on.”

What else keeps him busy these days?

Investing is just one of the many activities he undertakes. Talking about his other interests – “I invest in and produce Broadway theater, collect stamps, have fun with beautiful women, workout to stay in shape, write magazine articles and books including one coming out the end of March titled Around the World in 50 Years: My Adventure to Every Country on Earth, take photographs, climb mountains, and travel for several months a year in undeveloped lands.”