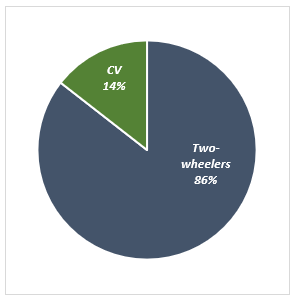 In 2007, Bajaj Auto acquired a 14% stake in KTM that has since grown to 48%. This partnership catalysed Bajaj Auto’s endeavour to democratise motorcycle racing in India. Bajaj Auto today exclusively manufactures Duke range of KTM bikes and exports them worldwide.

Bajaj Auto exports to 70+ countries and a significant share of revenues come from Exports. 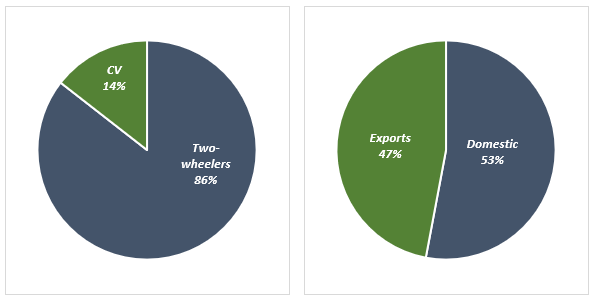 Hero Motocorp Limited (“Hero Motocorp” or the “Company”) is the dominant market leader in India – the world’s largest two-wheeler market – with over 50% share in the domestic motorcycle market.

Hero MotoCorp currently sells its products in more than 40 countries across Asia, Africa, Middle East, and South and Central America. Hero MotoCorp has eight state-of-the-art manufacturing facilities, including six in India, and one each in Colombia and Bangladesh.

During H1 FY2021, the Company made an additional investment of Rs. 84 Crore (US$11million) in Ather Energy, taking up its shareholding in the Company to 34.58%, up from 31.27%. Hero MotoCorp has been a part of Ather’s growth story since 2016, when it first invested as a part of Series B funding.

Harley-Davidson & Hero Motocorp Announce Agreements For India Market – On 27th October 2020, the Company announced as per a distribution agreement, Hero MotoCorp will sell and service Harley-Davidson motorcycles, and sell Parts & Accessories and General Merchandise riding gear and apparel through a network of brand-exclusive Harley-Davidson dealers and Hero’s existing dealership network in India.

TVS Motor Company Limited (“TVS” or the “Company”) is the third largest 2-wheeler company in India. The Company has an annual sale of more than 3 million units and an annual capacity of over 4.95 million vehicles. TVS Motor is also the 2nd largest exporter in India with exports to over 60 Countries.

TVS Motor manufactures the largest range of 2-wheelers, starting from mopeds, to scooters, commuter motorcycles, to racing inspired bikes like the Apache series and the RR310.

The Company has four manufacturing plants, three located in India (Hosur in Tamil Nadu, Mysore in Karnataka and Nalagarh in Himachal Pradesh) and one in Indonesia at Karawang.

Atul Auto Limited (“Atul” or the “Company”) is amongst the fastest growing 3 Wheeler Company in India, with the presence across 21 states with 200 primary and 130 secondary networks.

The Company’s dealership, sales, service, and spare parts network comprises over 600 touch points across the globe. ATUL has emerged as the only player with complete range of 3Wheeler products across the fuel range- Diesel, Petrol, CNG, LPG and Electric.

The Company’s plant owes its origin to M/s. Innocenti of Italy from which it bought over the plant and machinery, design, documentation, copyright etc. The Company also possesses the world right of the trade name LAMBRETTA / LAMBRO.

In 1975, the Company started its commercial production of Scooters under the brand name of Vijai Super for domestic market and Lambretta for overseas market. It added one more wheel to its product range and introduced three wheelers under the brand name of VIKRAM/LAMBRO. However, in 1997, strategically, the company discontinued its two-wheeler production and concentrated only on manufacturing and marketing of 3 wheelers.