Where one product or service is marketed with the intention of promoting/ marketing a product or service different from the one being marketed. Often this is done because it is illegal to propagate or promote a particular product for example – cigarettes and alcoholic beverages in India.

Often companies create a product with a similar name and use the same trademark as for the main product which cannot be actively marketed. For example to circumvent the ban on liquor advertising, Pernod Ricard sells music CDs to market its Royal Stag brand of whiskey, so much so that the tagline is – “it’s your life, make it large”. While the company may claim that music CDs is a completely separate business vertical, think about this – why would anyone get into the business of music CDs? That business failed many years ago. Companies like Sony and Universal scaled back their operations with the advent of internet and online music.

The Difficulty with Surrogate Advertising

Imagine if you are a listed company. You create a 100% subsidiary company to sell music CDs, of course with the intention of promoting your main product – cigarettes or liquor. Naturally, you are not making any revenue here and have huge advertising budgets. A shareholder files a case of mismanagement – i.e. for running a loss making subsidiary for so many years. Could you in a court of law argue that this is being done to promote cigarettes or liquor?

Diversify into music CDs but do not create a new company. Just create a new vertical within the same company. That way no one knows where expenses are being made. This article explains how diversification can help companies in passing off expenses incurred on one business vertical as being incurred on a different one.

While diversified companies must provide detailed segmental revenue, and a schedule of expenses in the notes to accounts, it is not required that they provide a further breakup of various heads under expenses.

So if “Advertising and Promotion” is one of the heads under expenses, there will be no obligation to further break up advertising and explain the exact nature of the same.

2 points need to be addressed here:

(i) Indirect advertising to create brand recall – This is the obvious way of promoting a restricted product.

In this, products are fashioned with similar or slightly varying brand or product name to create brand reconnect amongst consumers.

Example – Wills Lifestyle and Wills cigarettes, Baba Elaichi and BaBa Tobacco, 502 Pataka Bidi and 502 pataka tea.These products are then heavily marketed to create brand reconnect for the company and all its products.

Take the case of ITC – the company which sells 4 out of every 5 cigarettes sold in India. In terms of geographical reach and distribution network, the cigarette business of ITC is a logistical marvel with over 100,000 markets and 2 million retail outlets spread all across the country. This is as per ITC’s own investor presentation.

Point of sale advertising gives the cigarette companies a huge ad space. If these companies could put advertising hoardings over 2 million locations in India, there will be little need then to advertise using any other medium.

The problem is that a lot of advertising expense could be made on directly promoting a banned item since it is not be possible to state what percentage of expenditure was made on promotion and marketing of a specific business vertical.

This is the single biggest reason for diversification of tobacco and alcohol companies.

In India, this is done fairly freely. 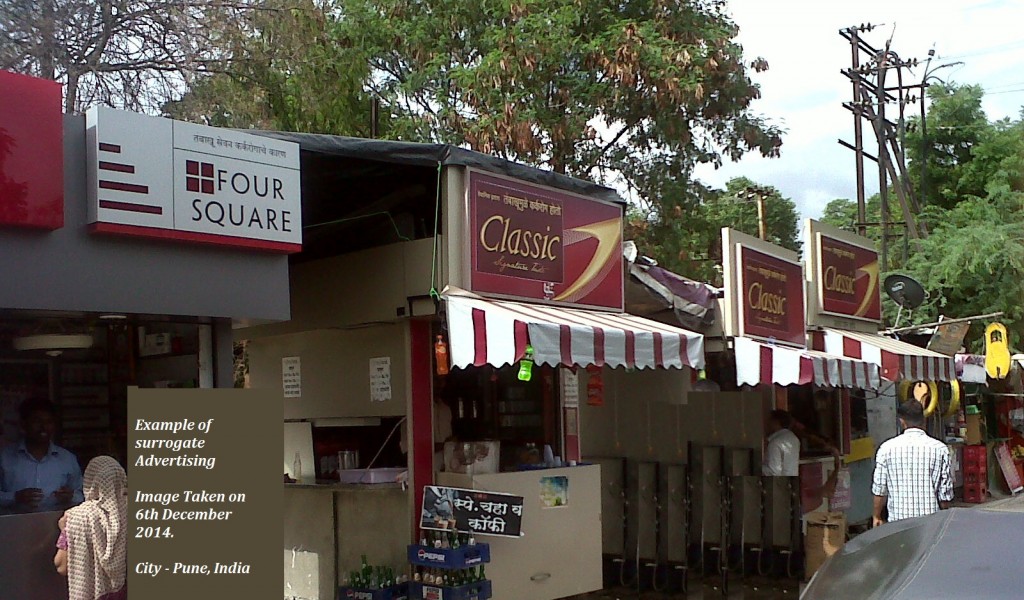 To give you an idea, the image above is of a popular street in the city of Pune (picture taken last week). These shops stay illuminated at night courtesy these electronic hoardings. There are millions of such shops spread all over the country. Is this really point of sale advertising?

Even if one performs an internal audit or looks at the internal ledger entries of the company, it will not be possible to break down the expense incurred in making and establishing these hoardings. This is because auditors (both internal and external) will provide an audit opinion based on the financial statements furnished to them by the company management. Now, the same entity which makes packaging and other paperboard material for the company (for example – ITC) will undoubtedly be making these hoarding. Their monthly bills raised on ITC may or may not break up what is spent on boxes, packaging and on making these hoardings. While no major research has yet been conducted in this area, based on what we see in the financial statements of a lot of liqueur and cigarette manufacturers, I believe the government might as well remove this ban.