Tata Global Beverages Limited (Tata Global or the Company) is a global beverages company engaged in the production and distribution of tea, coffee and water. The Company has branded beverage business operations in India, Europe, United States, Canada and Australia, plantation business in India/Sri Lanka and extraction business mainly in United States and China. The Company’s business segments includes – 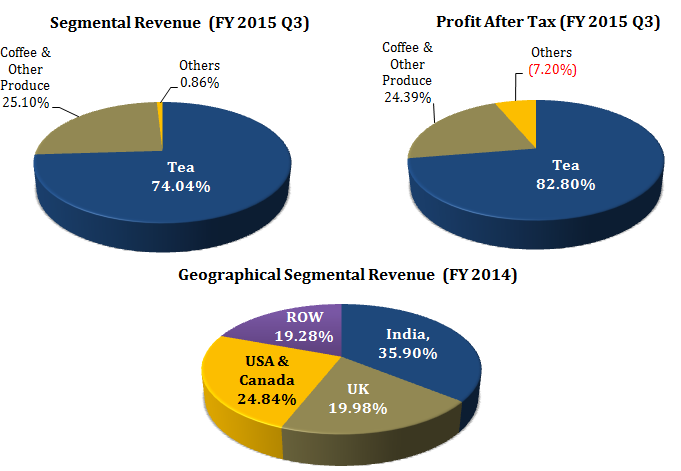 What’s Going for the Stock

Tata Global Beverages is the second largest tea company in the world and is ranked amongst the top ten players in coffee globally (Source: Company’s Annual Report 2014). The Company is currently a market leader in the Indian tea industry with a 25 % market share. Indian tea brands in its portfolio include Tata Tea Gold, Tata Tea Premium, Chakra Gold, Agni and Gemini, while Tetley remains the key driver of the Company’s global presence. 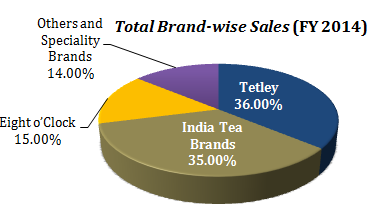 Tata Global Beverages has its brand presence in over 40 countries; about 65% of revenues come from overseas markets. The Company’s brand – Tetley, has a strong presence in the U.K. and Canada. Other important brands in the global marketplace include Good Earth (U.S.), Vitax (Poland), Jemca (Czech Republic) and Laager (South Africa). All these are amongst top brands in their respective markets.

The Company owns Eight O’ Clock Coffee (through its 57% held subsidiary Tata Coffee), the third largest coffee brand in the United States which contributes 15 % in total revenue. On a consolidated basis, coffee’s share in revenues has increased from 23 % in FY 2010 to 25.10 % in Q3 of FY 2015. A rising share in coffee will help improve profitability as margins on coffee are 4-5% higher than tea.

Tata Global Beverages is growing inorganically by merging with and acquiring brands in many countries.

Starbucks entered the Indian market in October 2012 through a 50/50 joint venture entered between Starbucks Coffee Company and Tata Global. Tata Starbucks Limited owns and operates Starbucks cafe’s across India. The cafes are branded as “Starbucks Coffee – A Tata Alliance”. As per the terms of the joint venture agreement, all Starbucks stores in India will source its coffee beans from Tata Coffee, a subsidiary of Tata Global Beverages.

The India Estate Blend, for which the beans are sourced from Tata’s coffee plantations, has become one of the best selling brands in Starbucks across 15 countries in Asia, including India.

Starbucks currently operates 65 stores in India across Mumbai, Delhi NCR, Pune, Bengaluru, Chennai and Hyderabad (as of December 31, 2014). Tata Starbucks is expanding its presence at a rapid pace and generated total revenue of Rs. 95.42 Cr. in FY 2014 (1.23 % of the Company’s total revenue). Although profitability remains a challenge as Tata Starbucks reported a loss of Rs.51.87 Cr. (more than half of its total revenue).

Given an evolving cafe culture in India, Tata Starbuck Limited has the potential to become a significant value driver for the Company.

Other Factors Which Could Have a Negative Impact

The Company’s profitability is impacted by the volatility in tea and coffee prices. Supply and price of both tea and coffee grades are affected by multiple factors, such as weather, natural disasters, crop damage, farm inputs, cost of production, and wage increases. Sharp rise in prices of major inputs like tea leaves & coffee beans could negatively impact the Company’s earnings if Tata Global Beverages fails to pass on the input cost increase completely to the consumers.

** The stock analysis of Tata Global Beverages including the financial analysis report linked above, is for information purpose only.  This analysis should not be taken as a buy/sell recommendation. The circumstances of the company and the economic environment may have changed since the date of this stock analysis. Click the link for an updated list of the blue chip companies in India.