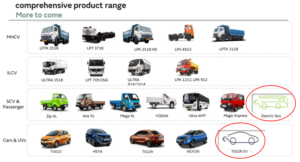 Clearly, Tata Motors stock price is largely being driven by JLR sales and company’s Indian operations have been a drain on its financials.

In February 2018, the Company registered a growth of 38% at 58,993 units as against 42,679 units due to the continued strong sales performance of its Commercial and Passenger Vehicles Business in the domestic market.

The Company has also reported net profit of Rs. 182 Cr. in Q3 FY 2018. The Company’s standalone business had been loss-making for four consecutive years.

Gaining Market Share in both Commercial and Passenger Vehicles

The Company is on track to regain market share in both commercial and passenger vehicles. In the commercial vehicle market, demand for higher tonnage vehicles, increased government funding & growth in e-commerce has helped. For the passenger vehicle segment, some of the product launches like Nexon, Tiago, Tigor and Hexa have been received well by customers.

The government’s push towards electric vehicle will also prove to be positive for the Company. According to SIAM, electric vehicles will constitute 40% for overall new car sales by 2030. On 8th March, 2018, Energy Efficiency Service Ltd (ESSL) has floated another tender for 10,000 electric cars.

Earlier in December 2017, Tata Motors has successfully supplied its first batch of Tigor EV to ESSL, as part of the tender for 10,000 electric vehicles floated by the government in September.

The Company’s JLR business is facing multiple headwinds. In Q3 FY 2018, JLR’s volume sales declined in key western markets — the UK, US and Europe — and rose in China and the rest of the world.

Part of the weakness could be blamed on the phasing out 17 models of Range Rover and Range Rover Sport. However, new variants of these models will return this year. The greater concern is increasing restrictions on diesel vehicles in Europe (the company’s European and UK portfolio being predominantly diesel).