(a) Complete solutions for captive power plants including Engineering Procurement Commissioning (EPC) of power plants and substations*, Balance of Plants (BOP) **, transmission and distribution of power, and industrial installations.

* Construction and maintenance of power substations is the key strength area for the Company.

[BOOT]                 Jhajjar transmission project in a JV with Kalpataru Power – transmission network to evacuate 2,400 MW from the Jhajjar Power Plant. The project will generate annual revenues worth Rs. 54 Cr. with for 25 years (extendable by 10 years thereafter).

100% order book for EPC & transmission. 20% of this order book size comes from ownership of BOOT and BOOM projects.

(c) The Company ventured into wind power in the year 2010 by aquiring 95MW of wind capacity from Suzlon and set up 112MW of capacity on its own in Tamil Nadu. However, in the previous financial year the Company sold 44MW out of this capacity and plans to divest the balance capacity as well and shift its focus back on the EPC space where the Company has witnessed its largest order book expansion from Rs. 1,200 Cr. In 2014 to Rs. 2,025 Cr. in 2015.

Techno Electric is strongest amongst peer group in the EPC business, particularly in its niche of commissioning, maintenance and service of substations. Transmission and distribution is a clear growth area where maximum government expenditure will be made to clear bottlenecks. The Company has strengthened its presence in this area with a higher percentage of order book coming from transmission and distribution. 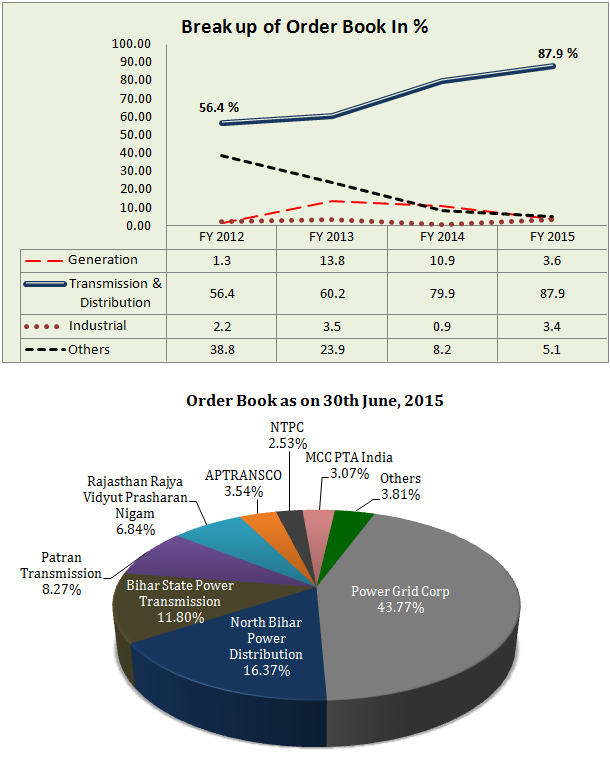 Unlike power generation companies, Techno Electric is not dependent upon the cash strapped State Electricity Board (SEBs).

Also Read: Why Can Distribution Companies (SEBs) not pay?

The Company plans to completely exit its wind business and utilize proceeds to bid for more EPC projects. In FY 2015 the Company sold 44.45 MW of wind power assets (for a consideration of Rs. 220 Cr) and plans to sell the balance  162.9 MW. This should not only improve the Company’s ability to bid for more projects but will also help the Company in reducing the debt on its books thereby further improving efficiency of capital employed. Further, the Company maintains good working capital ratio (in the range of ~1.75:1).

Government Spending and Reforms To The Electricity Act 2003

Owing to the increasing urbanization and industrialization, the government has identified the power sector as key to promote sustained industrial growth. The government spending has a clear focus on improving bottlenecks in the transmission infrastructure. Improvement in this area would directly benefit the Company which gets a a majority revenue from its substation/ transmission projects.

[2] Investment in transmission and distribution space: Investment in the transmission and distribution space in the 12th Five-year Plan period is expected to be ~$35 billion, with $19 billion coming from Power Grid Corporation and the balance $16 billion to come from the private sector.  Techno Electric expects to carve out ~5% of this $35 billion opportunity.

While the Company has been judicious in bidding for viable projects, SEB’s who comprise the largest pool of potential clients for the Company are ‘largely bankrupt‘, a problem highlighted by me in this post here.  Unlike power producers, Techno Electric gets its revenue on a project by project basis, (being a service provider in this space). This significantly reduces the likelihood of payment defaults emanating from the same customer over a longer term.

The Company entry into wind business and power transmission business in Jhajjar and Patran are far away from its core business (EPC). The performance of wind segment remains a laggard. The Company does not intend to invest further in wind capacity and has already sold some of these assets (44 MW) as it has not been able to achieve the kind of growth and cash flows it had initially envisaged.

Techno Electric has now diverted its excess cash flows generated from the EPC business to the power transmission business. The inability of this projects to generate projected cash flows could impact the overall revenue and profitability of the Company.