Top 10 Listed IT Companies in India

Broad Trends in IT Industry for 2015:

With its contribution to the country’s exports, foreign exchange earnings and employment generation, the Indian IT industry is one of the most significant growth drivers for the Indian economy. Future growth in the sector will be fueled by growing demand from global corporations for new services such as digital technology, mobile applications and cloud computing.

India Advantage – India is widely recognized as the premier destination for the offshore technology services due to cost competitiveness in providing IT services. As per National Association of Software and Services Companies (NASSCOM), revenue of the Indian IT and Business Process Management (BPM) industry was U.S. $119 billion up by 12 % for the year 2014-15 over the previous year. The Indian IT sector is export driven with exports contributing ~80% to the total industry revenue. Out of this U.S. $119 billion, exports stood at U.S. $98 billion, up by 12.3 % over the previous year. 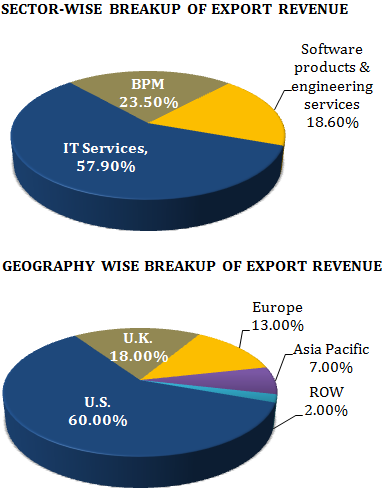 In terms of markets, the U.S. and the U.K. remain key markets for Indian IT / BPM exports (excluding hardware), accounting for nearly 80% of the total global market.

Quick Facts about Indian IT Sector

Financial Performance of Large IT Companies

From a valuations perspective also, mid-cap IT companies in India offer the best investment value. At current valuations, mid-cap IT stocks look quite attractive; most of these stocks are available at a discount to their large-cap peers. Companies such as Infosys, TCS, HCL Technologies and Wipro are trading at a price-to-earnings (P/E) ratio of 15-22, while mid-cap companies such as NIIT Technologies, Mindtree and Hexaware are trading at 7-11 times P/E multiple.

Live Market Performance of Listed IT Companies in India