As promised, here’s my post on power stocks and top ideas in this sector. I believe that at current prices these stocks offer great value and make a compelling buy case for anybody looking to build a long term wealth creation portfolio.

Also see: A Video Post on these recommendation at the end of page.

UDAY Bonds Are a Game Changer

Over the past decade, power sector in India has faced multiple challenges. Ground zero for all problems – State electricity Boards (SEBs), who are the biggest paymasters for almost all power generation companies in India have been facing a problem – they are nearly bankrupt!

Look at the irony – enough power can be produced; people don’t want power cuts and in most part, are happy to pay for power; but SEBs somehow don’t have money to buy power.

Over the years, SEBs have accumulated massive debt (by one estimate – the figure is in excess of 5 lac crore).

Recently, the Government of India launched the Ujwal DISCOM Assurance Yojana (UDAY). The scheme focuses on improving financial position of SEBs, which will lead to higher power demand by SEBs. This will be a long term positive for NTPC as it will lead to further improvement in Plant Load Factor (PLF).The scheme has so far taken over a quarter (i.e. 25%) of the debt of SEBs and has met with remarkable success.

If the health of SEBs improves, it could prove to be a big turnaround for power stocks which have reflected the problems in the sector over the last decade or so.

Top 20 power stocks in India based on Market Capitalization 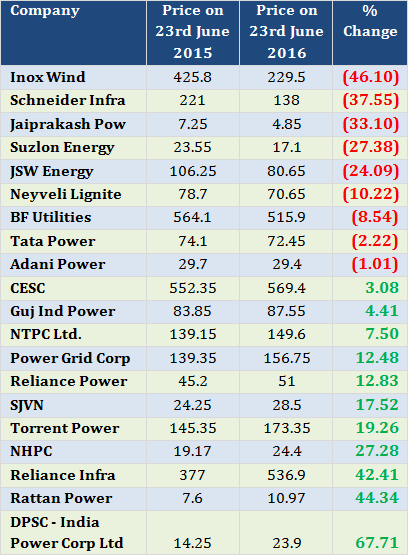 The price correction in table above is largely on account of excessive debt, rising interest burden and the inability of these companies to make profits on account of difficulties of SEBs.

For more on problems in this sector and debt position of the companies above, See: Power Stocks: Deep Value or Junk Buying?

Some of these companies are ‘highly unlikely’ to recover, given that their interest charges are (and have for a long time been) far in excess of their operating profits. Naturally then, the most critical factor in my selection has been- debt positioning, the other things to keep in mind is that solar power (and with a remote chance – nuclear power) over the next decade could overtake conventional sources like coal based/ thermal plants. 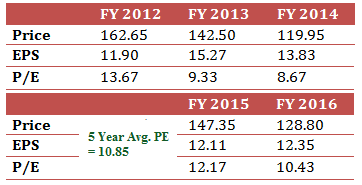 NTPC Limited (“NTPC” or the “Company”) is the largest power generating company in India. Set up in 1975, NTPC is engaged in the generation, distribution, and sale of power to state power utilities in India. NTPC operates with a current power generation capacity of 45,548 MW, with 18 coal based, 8 solar and 7 gas based stations, located across the country.

The Company has maintained an average dividend yield of 3.08 % over the last 5 financial years. 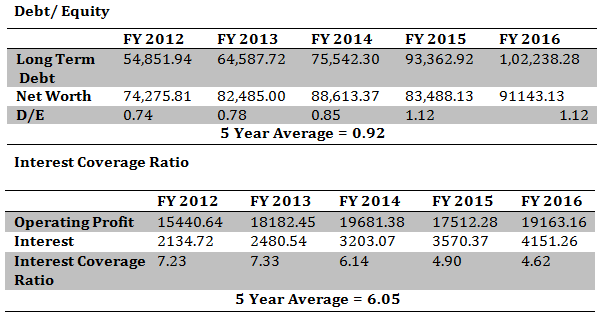 NTPC maintains healthiest capital structure in the listed (power) space. NTPC has maintained an average debt to equity ratio of 0.84:1.

NTPC Limited has maintained its leadership position in the Indian power sector in terms of size and efficiency, with approximately 18.44% of total capacity of the country. The Company contributes to around 27% of the total power generation in the country. The Company has been among the lowest cost producers of power in India at its overall tariff of Rs. 2.96 per unit and provides power to 32 out of the 35 States and Union Territories. This gives NTPC, the status of a national power Company with a geographically diversified customer base.

The Company is able to sustain its leadership through rapid capacity addition, high efficiency and competitive cost of power. The installed capacity of NTPC at present is 45,548 MW and has over 23,000 MW capacity under construction and nearly 9,500 MW capacity is under bidding. This is likely to result in strong revenue visibility for NTPC over the next three years. NTPC is targeting to become a 1, 28,000 MW power company by FY 2032.

I had written a detailed post on SJVN sometime back. My views remain the same, You can refer to that post here – SJVN Stock Analysis

SJVN is currently trading at a trailing PE multiple of 8.27. 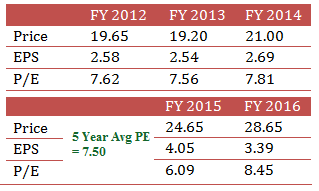 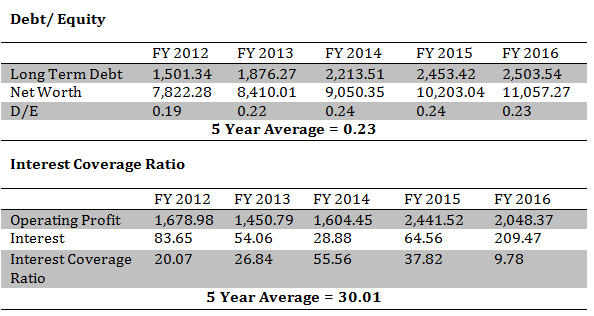