This Stock Analysis report presents a long term outlook and the future prospects of Tourism Finance.

At CMP of Rs. 36.85 (10th July, 2014), Tourism Finance is trading at a P/E of 5.36x. We expect the stock to outperform the market as it is grossly undervalued at CMP. The Company has had a record of consistent dividend payouts. The Company has consistently paid a dividend of 12 % over the past 4-5 years and HAS MAINTAINED AN AVERAGE DIVIDEND YIELD OF 4.61% OVER THE LAST 5 FINANCIAL YEARS.

Tourism plays an important role in economic development and creation of jobs in India. The tourism and hospitality industry contributes about 6.23% to the national GDP and 8.78% of the total employment in the country. Given the potential of tourism sector, Government of India has also budgeted an expenditure of Rs. 35,000 Cr. for tourism sector in its 12th five year plan period (2012-17) as against a budget of Rs.12,000 Cr. in the 11th plan. The Government of India is taking various steps to encourage the sector by its marketing efforts –  ‘Incredible India’ and ‘Atithi Devo Bhavah’ campaign, strengthening tourism-oriented training & education, improving infrastructure and promoting the country as a destination for heritage, wildlife, medical, wellness, adventure and eco-tourism. India has a strong domestic tourism industry with ~ 851 million domestic tourists (estimates based on 2011 statistics) which is likely to grow further on the back of a rapidly rising middle class with increasing disposable incomes. According to the Working Group Report for the 12th Five Year Plan (2012-2017) of the Ministry of Tourism (“Working Group Report”), the number of foreign tourist arrivals and domestic tourist visits in 2016 is estimated to be 11.24 million and 1,451.46 million respectively. Tourism sector is poised at a crucial point to reap the benefits of India’s growth potential.

Role of Tourism Finance Corporation in the Sector

According to Planning Commission estimates, 4.97 million hotel rooms will be required by 2016 in India, which is an additional 2.26 rooms from the 2010 level. Given the limited availability of hotel rooms and the demand-supply gap in India, there is a need for the development of new projects, facilities and services. This provides a huge opportunity to the Tourism Finance Corporation which is engaged in the business of providing financial assistance to companies for setting up and/or development of tourism-related projects, facilities and services such as: hotels, restaurants, resorts, amusement parks etc. Since its inception, the Company has provided financial assistance in the development of 43,534 rooms and provided direct employment to about 82,735 persons in tourism industry.

The Company has entered into infrastructure project financing to tap the growth opportunities in the sector. The Company believes that by financing infrastructure projects, such as power, ports, airports, roads etc, it will indirectly be providing a boost to the tourism and hospitality industries. The Company is taking steps to diversify its portfolio by not only financing new hospitality projects but has also been actively taking consultancy assignments for various state and central governments by drafting tourism policy, other project advisory services for tourism development. 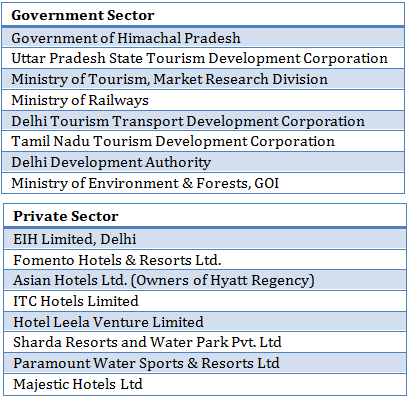 India’s hospitality industry saw a 15%-20% drop in hotel room tariffs in 2012-13 due to the global economic slowdown and fuel price inflation which has resulted in air travel getting dearer by up to 30-40 % due to which domestic travelers in particular have cut back on their travel spends.  While we believe that we are nearing the end of a bad economic cycle any meaningful improvement in the economy will primarily depend upon progress on the following fronts:

The Company faces competition from both public as well as private sector banks which have the competitive advantage of access to lower cost funds and capacity to take relatively higher exposure to some more high risk – high reward projects.

Project lending involves risk of default because projects under development are time and cost consuming, in addition other factors beyond the control of the borrower which may include changes in industrial/economic policies, mismanagement also create high credit risk for companies engaged in financing of such nature. Further, credit risk applies not only to loans, but also to other forms of exposure such as guarantees, acceptances and investments in securities.

** The stock analysis of Tourism Finance Corporation including the financial analysis report linked above, is for information purpose only.  This analysis should not be taken as a buy/sell recommendation. The circumstances of the company and the economic environment may have changed since the date of this stock analysis. Click the link for an updated list of the small cap companies in India.