Unitech shares crashed 35.27 % on June 03, 2015. Speculations that lenders were planning to sell off pledged shares of the promoters led to this massive decline in share price. While 90.32 % of promoter’s equity is pledged (as on 31 March, 2015), the promoters on have denied any sale / prospective sale from any lender. On the contrary, the promoters have clarified that the company’s debt has been stable and is at manageable . Unitech’s long term debt equity ratio is one of the lowest among its peers at 0.25 (for FY 2015). 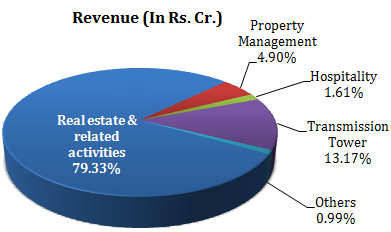 Unitech Limited (“Unitech” or the “Company”) is a leading real estate developer in India. The business operations of the company consists of construction, contracts, development of real estate, consultancy and management services, hotels, manufacturing of power transmission and telecom towers. Real estate development includes development of mini cities/townships, construction of residential and commercial complexes, including shopping malls and various types of dwelling units. The related construction activities include construction contracts of highways, roads, powerhouses, refineries, hotels, hospitals and various types of other buildings/structures.

The biggest problem that the real estate developers face is the accumulated debt on their balance sheet. A majority of this debt was taken by these companies to acquire huge land banks between 2003 – 2008 when the economy was on the up move and when real estate prices and demand were both soaring. Larger land bank also helped them get better valuation from the market.

The table below shows the total debt for major real estate companies for Financial Year ended 2015.

Unitech is continuously making an effort to reduce its debt exposure. The Company has already reduced its long term debt from Rs. 9,055.84 Cr. in FY 2009 to Rs. 2,165.55 Cr. in FY 2015, a decline of 76.09 %. The Company is further planning to reduce its debt by 15-20 % in the coming quarters by selling some of its non-core land parcel and by monetizing some of its commercial assets. By non-core land parcel, the Company means the sale of some land for which it has no development plans in the near future.

Things to Watch: Factors one must check while investing in a real estate company are its sales volume and balance-sheet strength. Most developers give details of operations on their websites. Consistency in sales, project execution and cash flow generation are the key to evaluating a real estate company.

For any real estate companies, it is important to identify the different requirements of customer groups living in different cities and then successfully cater to different market segments. Various factors like rapid urbanization, increase in nuclear families etc. continues to drive the real estate sector in India. In order to take advantage from the opportunities that the market is offering, Unitech develops properties across wide variety of segments, which extend across:

The Company has a large diversified land bank which allows it to offer a wide variety of customized and market specific product. Whenever the market conditions improve, Unitech on the back of large and well diversified land bank will be able to develop and increase the speed of new launches and sales. The Company currently has nearly 100 ongoing projects covering a total of 38.41 million sqft of area to be constructed and delivered in the coming years. 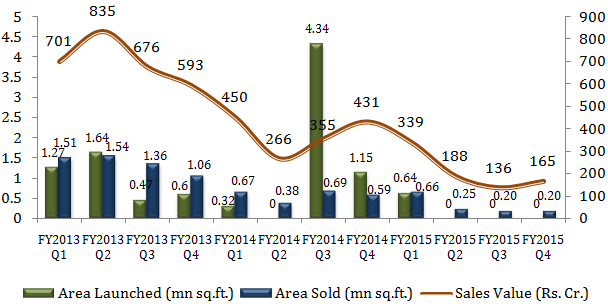 CAVEAT: Builder companies without specific generalizations often amass a large amount of unaccounted money. In reality, a lot of expenditure incurred in this sector is also made by these builders using unaccounted money. Overall, this should be taken care of in valuation.

While the real estate sector has strong fundamentals, it continues to be highly dependent on economic cycles. The demand for real estate, residential as well as commercial, usually moves along with economic growth.  That is why economic weaknesses like high levels of inflation and fall in income growth has negatively impacted demand. The slowdown in the economy has reduced people’s disposable income and thus their ability to make down-payments. High interest rates mean high equated monthly installments (EMIs) and low loan eligibility. This has resulted in the problem of poor demand and high cost. In such situations, fresh construction slows down and builder companies hold on to their existing inventory of unsold projects.

The weak demand has also created a cash crunch for developers. Banks have also become cautious about lending to the sector. In order to maintain steady cash flows, developers have resorted to sell their land banks.

Unitech is continuously showing weak financial performance from FY 2009 to FY 2015. For FY 2015, the Company reported a net loss of Rs. 162.66 Cr. The results of the Company are adversely impacted due to the weak demand, decline in real estate prices and high finance cost. The Company has also not declared any dividend over the last 4 years. While the stock may be deeply undervalued, unless there is a pick-up in housing market and the existing supply gets consumed, things will not start moving fast for developers.