Unity Infra projects Limited or UIL is engaged in construction and engineering activities primarily in India, Nepal and Bangladesh. The Company operates in three segments:

The Indian infrastructure industry is the second largest contributor to the country’s GDP growth. Infrastructure companies such as Unity Infra projects have a huge opportunity of capitalizing on the openings presented by the trillion dollar 12th five year plan devised by the Planning Commission, Government of India to meet the unmet infrastructure demand in the country.

As per the 12th 5 year plan, key infrastructure sectors have the following allocations:

This Stock Analysis report presents a long term outlook and the future prospects of Unity Infraprojects. 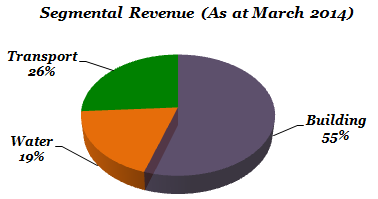 Over the years Unity Infra projects has leveraged its competitive positioning in infrastructure domain to foray into other verticals comprising water and transportation projects.Unity Infra’s order book is spread across three vertical, viz; building, water and transport, with expertise in building construction projects. The Company has progressed well in a short span with its order book witnessing growth at a CAGR of 15% between FY 2007 to FY 2013, resulting in 19% CAGR sales growth over the same period showing strong proven execution capability with growing asset base.

In addition, the company has a well diversified order-book across 20 states in India as well as 2 projects overseas, in Nepal & Bangladesh.  This diversification across verticals and geographies minimizes the risk from any sectoral or geographic concentration. 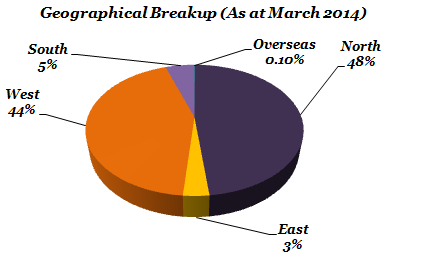 Unity Infra projects currently has 70 ongoing projects. Of this more than 65% i.e. 46 projects are in the building space and the balance – 12 contracts are in water and 10 contracts are in the transport segment. Company’s current order book stands at Rs. 3,183 Cr (as in March 2014), highlighting a substantial year on year growth. Its Current order book-to-sales ratio stands at around 2.2x FY14 revenues providing comfortable revenue visibility over the next two years.

The Company’s strong order inflow and robust operating level performance can serve as key trigger for the stock in the near term.

Advancing to a bigger league

With proven execution record and growing net worth, the average order size for United Infra has increased from Rs. 65 cr. in 2005 to Rs. 573 Cr in 2013. The big ticket size orders enable the Company to deploy its resources effectively resulting in better profit margins. As the Company gains expertise in micro-tunneling and projects involving higher engineering skills, it now competes with more established players in the construction business. Over the last few quarters, the Company has entered into strategic JV agreements with various other companies whose resources, skills and strategies are complementary to UIL’s business through which UIL has developed the expertise to bag and handle large ticket projects.

Unity Infra’s business interests are protected with 90% of its contracts having cost escalation clauses, an adequate hedge amidst fluctuating raw material costs. Besides, a majority of the company’s projects have been awarded by government agencies. More than 85% of its orders are state sponsored and only the remaining 15% come from the private sector. This ensures safe and timely realization of receivables. Additionally, there is lesser likelihood of cancellation or deferment of projects.

The Government of India is running a high fiscal deficit which limits its spending capacity. Given that a considerable portion of Unity Infra’s order book comes from civil infrastructure and a majority of its revenues are derived from the government coffers, any slowdown in infrastructure spending by the government could adversely affect the business prospects of the company going forward.

For past many months India has been suffering from a high rate of inflation with the general level of prices for commodities and raw materials rising at an alarming rate. This has put incredible pressure on margins of Company as its clients deal with the rising commodity prices. Commodity price declines and unit volume reductions resulting from an over-supply of materials used in industrials and energy equipment & services industries can adversely affect those industries. Further, Infrastructure companies are subject to a variety of factors that may adversely affect their business or operations including interest rates and costs in connection with capital construction projects. High inflation have kept R.B.I. from cutting key interest rates which directly affect the capital intensive sectors such as infrastructure as availability of money for capital intensive projects becomes tighter. While we believe that we are nearing the end of a bad economic cycle any meaningful improvement in the economy will primarily depend upon progress on the following fronts:

** The stock analysis of Unity Infra projects including the financial analysis report linked above, is for information purpose only.  This analysis should not be taken as a buy/sell recommendation. The circumstances of the company and the economic environment may have changed since the date of this stock analysis.