Brief background: Fifteen telecom companies owe over Rs 1.47 lakh crore to the Government of India in lieu of past license fees, spectrum charges, interest and penalties (“Adjusted Gross Revenue” or “AGR“). Vodafone Idea alone owes the Government over Rs. 54,000 Crore in this regard.

Keep in mind: Of this Rs. 54,000 Crore; penalties and interest alone add up to over Rs. 40,000 Crore. It is this component which the telecom companies’ demand should be waived off. In fact, Vodafone Idea went to the extent of saying that they will be forced to shut down operations if they were made to pay this entire amount in one go which in turn will result in major direct and indirect unemployment and will be another jolt to the already slowing economy.

The matter is in the Supreme Court and like all high profile matters, the end to this one may require some reaching out to the Government of India. While the Government has not accounted for this due in its budget for FY 20-21, the amount remains as dues on its books which they intend to recover fully (this as many analysts believe is unlikely to happen and the Government may soften its stance going forward).

In its October 2019 hearing, the Supreme Court required all telecom companies to pay their AGR dues to the Department of Telecom, GOI by 23 January 2020. On 23 January2020, three telecom companies (Vodafone Idea, Bharti Airtel and Tata Teleservices) filed an application with the Supreme Court seeking more time to pay their dues to the Department of Telecom.

This was considered a reason fit enough for rating agencies to downgrade the outstanding debt instruments of Vodafone Idea to “BELOW INVESTMENT GRADE” rating. As a result on 24 January 2020, CRISIL downgraded Vodafone Idea’s Non-Convertible Debentures of Rs 3,500 crore CRISIL BBB- to CRISIL BB (with negative implications).

Keep in Mind: various rating agencies consider BBB- as the lowest rating for a security to be classified as “INVESTMENT GRADE”. Once a security falls below this rating, they are no longer investment grade and fund houses will take a haircut on their value in line (or more) based on these guidelines finalized by the AMFI Valuations Committee: 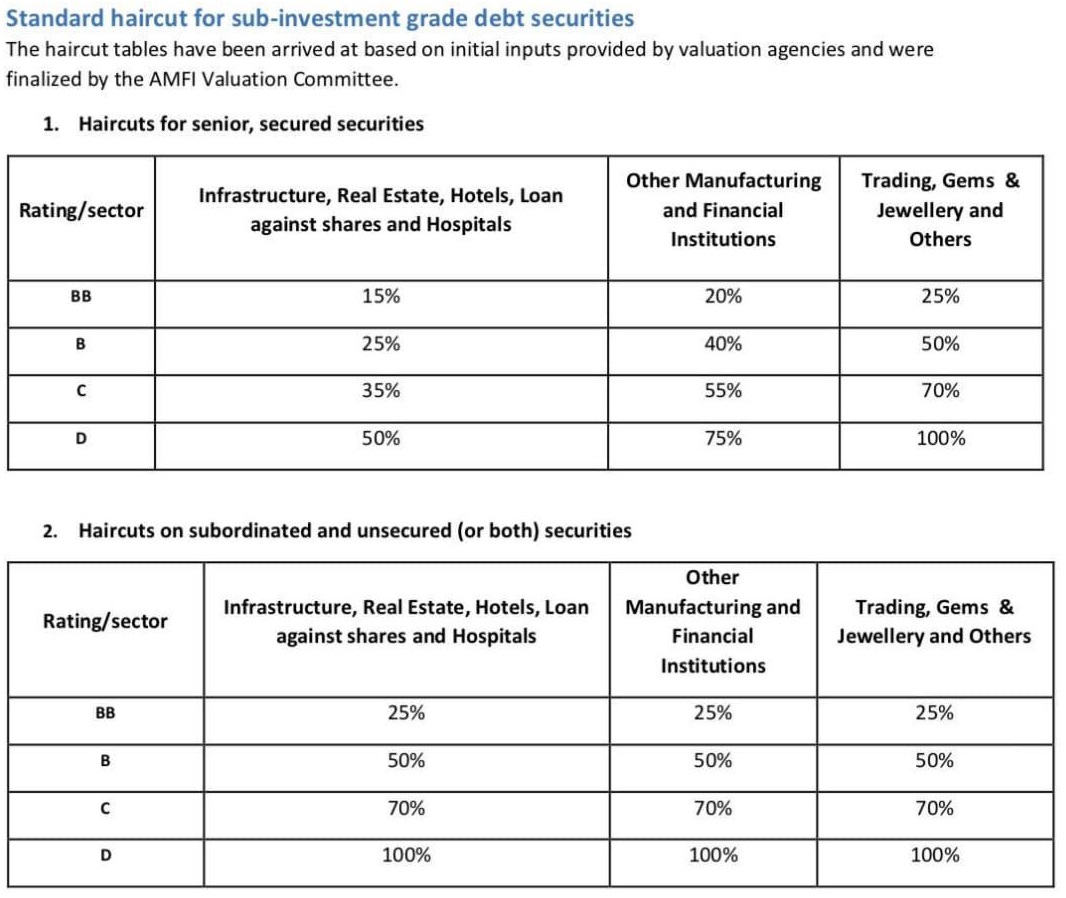 What Changed on 24 January 2020 – CRISIL Action and When can Fund Houses Create a Segregated Portfolio?

In accordance with SEBI guidelines, if a rating agency downgrades the debt instruments of any issuing company below BBB-, mutual fund managers can create a segregated portfolio (i.e. a separate folio of those securities) – a practice called side pocketing.

Side Pocketing: essentially then, all the unit holders now own 2 portfolios – a segregated portfolio of below investment grade securities; and a main portfolio of all the remaining debt securities.

(In case of interest, look at this actual fact sheet of a mutual fund scheme with a segregated portfolio).

What Happens to Segregated Portfolio?

“By segregating; mutual fund houses protect the interest of existing unit holders. Otherwise, once the NAV of the fund falls (upon a rating downgrade); while existing unitholders will suffer, anyone who buys at this lower NAV stands to gain in case the rating is upgraded in future and the NAV rises sharply”.

As and when the due date/ maturity date of securities held in segregated portfolio comes up, the unit holders of segregated portfolios receive whatever is paid out by the issuing company in lieu of these “below investment grade” securities. It could be a full 100% of the face value or nothing at all.

For Vodafone Idea, I believe mutual fund investors are likely get their money back if the Supreme Court waives off the interest and penalty component of their AGR dues. That said, the NAV of the fund they invested in may not recover. Further, most of these NCDs are due in the next 2-2.5 years. Here’s a chart on their maturity for UTI funds (UTI funds took the worst hit on account of the Vodafone Idea default).

A word of caution: I have been asked many investors – Should you be buying into these schemes for any arbitrage opportunity? Or, Because they have fallen too much and will only go up from here?

– No. Please don’t buy for the above reasons. Although funds in this category will perform rather well over the next 2 years (view). Your reasons for buying and the funds you buy will determine your returns.