What is Corporate Debt Restructuring (CDR)?

Corporate Debt Restructuring (“CDR”) mechanism is a voluntary non statutory mechanism under which financial institutions and banks come together to restructure the debt of companies facing financial difficulties due to internal or external factors, in order to provide timely support to such companies. 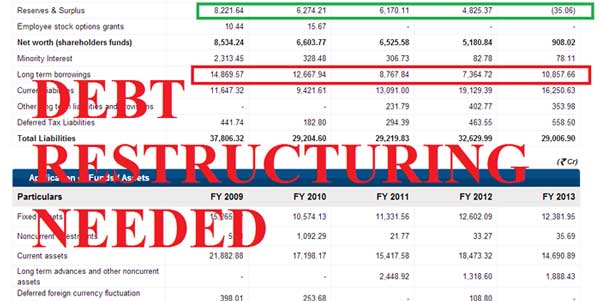 The objects of the CDR mechanism, as enunciated by the Reserve Bank of India, the central bank of the country are-

“To ensure timely and transparent mechanism for restructuring of corporate debts of viable entities facing problems, for the benefit of all concerned.”

“To aim at preserving viable corporates that are affected by certain internal and external factors”.

“To minimize the losses to creditors and other stakeholders through an orderly and co-ordinated restructuring programme”.

How does the Corporate Debt Restructuring (CDR)mechanism Work?
The CDR mechanism has a three tier structure-

CDR standing Forum –The representative general body of banks and financial institutions participating in the CDR system. It is a self empowered body which lays down the policies and guidelines, such as the timeframe within which a unit shall become viable and the minimum level of promoter contribution. It also monitors the progress of corporate debt restructuring. The Forum also provides a platform for borrowers and creditors to amicably evolve policies for working out debt restructuring plans in the interest of everyone. The CDR Standing Forum comprises of Chairman and Managing Director, Industrial Development Bank of India Ltd; Chairman, State Bank of India; Managing Director and CEO, ICICI Bank Limited; Chairman, Indian Banks’ Association as well as Chairmen and Managing Directors of all banks and financial institutions participating as permanent members in the system. Most of the big financial institutions in India that lend money to companies are permanent participating members of the standing forum.

CDR Core Group – A CDR Core Group is carved out of the CDR Standing Forum to assist the Standing Forum in convening the meetings and taking decisions relating to policy, on behalf of the Standing Forum. The Core Group consists of Chief Executives of Industrial Development Bank of India Ltd., State Bank of India, ICICI Bank Ltd, Bank of Baroda, Bank of India, Punjab National Bank, Indian Banks’ Association and Deputy Chairman of Indian Banks’ Association representing foreign banks in India. It lays down policies and guidelines to be followed by the CDR Empowered Group and CDR Cell for debt restructuring, including policies regarding the operational difficulties faced by the CDR Empowered Group. It also prescribes time frame, and modalities for the enforcement of time frame for cases that are referred for the CDR mechanism.

CDR Cell – The CDR Cell makes the initial scrutiny about the health of the company and the role of corporate governance, and scrutinizes the of the proposals received from borrowers / creditors, by calling for proposed rehabilitation plan and other information and puts up the matter before the CDR Empowered Group within one month to decide if rehabilitation is prima facie feasible. If found feasible, the CDR Cell will proceed to prepare detailed Rehabilitation Plan with the help of creditors and, if necessary with experts to be engaged from outside.

Reference to CDR system
Reference to the CDR Cell may be made by (i) one or more creditor who have minimum 20% share in either the working capital or term finance of the company in respect of which the reference is made, or (ii) by the concerned corporate if such corporate is supported by a bank or financial institution having 20% stake as above.

Legal Basis and the case of foreign lenders
CDR is a non-statutory mechanism and a voluntary system which is based on debtor creditor agreement (“DCA”) and inter-creditor agreement (“ICA”). The debtors accede to the DCA either at the time of the original loan documentation (for future cases) or at the time of reference to the CDR Cell. All participants in the CDR mechanism through their membership to the standing forum enter into a legally binding agreement, with necessary enforcement and penal clauses to operate the system through laid down policies and guidelines. The ICA signed by the creditors is valid for three years and renewed for a similar term thereafter.

The lenders in foreign currency outside the country are not part of the CDR mechanism. Such creditors and also creditors like GIC, LIC, UTI etc., who have not joined the CDR mechanism, could join the same for a particular companies debt restructuring by signing transaction to transaction ICA, wherever they have credit exposure.

As per section 9 of the ICA which deals with the participation of non members in the CDR mechanism;
“the Participating Financial Institutions and Banks agree that parties which are eligible and have not joined the CDR System may be permitted by the CDR Empowered Group to join in the Workout of Restructuring Scheme of an Eligible Borrower to whom they have provided Financial Assistance by signing/executing letter of accession in the form provided in Part B of Schedule-II hereto on transaction–to-transaction basis, prior to the consideration of the preliminary Restructuring Scheme by the CDR Empowered Group. Upon admission by the CDR Empowered Group, such party shall be deemed to be a Participating Financial Institution or Bank, as the case may be, for the purposes of this Agreement and shall pay Rs. 2 lakh (Rupees Two Lakh) at the time of signing the Letter of Accession.”

Section 12 of the ICA reads;
“a decision of the CDR Empowered Group relating to prima facie feasibility and/or final approval of a Restructuring Scheme shall be taken by a Super-Majority Vote at a duly convened meeting, after giving reasonable notice, to the Lenders and to the Eligible Borrower”.

Where a foreign lender becomes party to the ICA as per section 9 above and signs the ICA for particular companies debt restructuring, the question that arises is, whether such lender will be included in the super majority vote? To answer that question it is important to understand the definitions of Super majority Vote and Lender.

Section 1 (z) of the ICA defines, “Super-Majority Vote” as;
“Votes cast in favour of a proposal by not less than sixty percent (60%) of number of Lenders and holding not less than seventy-five percent (75%) of the aggregate Principal Outstanding Financial Assistance”.

Section 1 (q) defines Lender as;
“The Participating Financial Institutions and/ or Banks, which have granted Financial Assistance to such Eligible Borrower and a party to this Agreement”.

Once a foreign lender signs the ICA as per section 9 above, it falls within the definition of Lender as a ‘party to the agreement’. A lender shall vote in the super majority vote as per the definition of Super Majority Vote above. Hence, the foreign Lender gets voice in the decision making process and is counted towards calculating the 60% and 75% thresholds.

The CDR system favours the Indian banks. While foreign lenders do get the right to vote in the super majority vote once they sign the ICA, What tilts the mechanism in favour of Indian banks is that it is the existing group of participating financial institutions and banks who get to choose on a case by case basis if they want to include a new lender to the CDR mechanism. It could be debated that the existing members may not be keen to allow a foreign lender with an exposure that could account for more than 25% of the voting in the Super Majority Vote. For this reason foreign lenders who have minor exposure to a company prefers to deal with the company independently rather than becoming part of the CDR mechanism as signing the ICA would bind them to the final approved package.

Hypothetical
Assume that a company has the following structure of debt on its books;
(a)    Domestic bank lending- 45%
(b)    External commercial borrowing- 38%
(c)    FCCBs (Foreign currency convertible bonds) – 17%

In a CDR mechanism for such company there is an omnipresent spectre of favour towards domestic banks as they may choose not to include the lenders falling under category (b) and (c) in the CDR mechanism. Once the final restructuring package is formulated it will most likely have an effect on lenders falling under category (b) and (c) as well. For example where as per the terms of the package the company decides to sell some of its assets on which the foreign lenders had a charge. CDR Empowered Group has quasi judicial powers and its decision and approved package are final. The only recourse left to the foreign lenders is to petition the court for winding up of the company and not give a no objection certificate which is usually required from the Lenders for sale of an asset by the company.

Firstly, a Non-Performing Asset is a loan or an advance where:

Stand still clause– One of the most important elements of the DCA is the stand still clause whereby both parties commit themselves not to take recourse to any other legal action during the standstill period, which is the period of 90 or 180 days as the case may be. This helps the system work well and undertake the necessary debt restructuring exercise without any outside intervention, judicial or otherwise.

Additional financing and Exit Option– Additional finance as per the terms of the final CDR package is to be provided by all creditors of a standard or sub-standard account irrespective of whether they are working capital or term creditors on a pro rata basis. In case for any internal reason, any creditor who is outside the minimum 75% and 60% Super Majority Vote threshold does not wish to commit additional financing, that creditor will have an exit option. However, such creditor has to either, (a) arrange for its share of additional finance to be provided by a new or existing creditor, or (b) agree to the deferment of first year’s interest due to it after the CDR package becomes effective. The first year’s deferred interest without compounding is payable along with the last installment of the principal due to the creditor.

For any questions and help on any aspects of CDR, you can write in to me at – rajat@sanasecurities.com.