This Stock Analysis report presents an outlook of Zylog Systems. This analysis is not a buy sell recommendation for which you should consider our premium section.

Caveat: Fundamentally, the Company appears robust, however the Promoters have sold a major chunk of their stake in the Company. This has led to a 97% decline in the share price from its previous highs and has caused serious erosion in the market capitalization of the Company. This is partly the reason why the Company is trading at current (low) P/E valuations.

Robust Growth in IT Industry

In the last ten years, the Indian IT industry has grown at a Compounded Annual Growth Rate (CAGR) of 30 %. India currently accounts for about 74 % of the global IT off-shoring market. Though the tough global economic conditions have had a negative impact on the Indian IT industry but the industry has positively faced these challenges and has managed to sustain a high growth rate.

While exports dominate the IT industry at present, there is huge scope of growth in the domestic market. In terms of industry verticals, Banking, Financial Services and Insurance (BFSI) have lead the Indian IT services market with 21.5 % market share. In future, energy and utilities followed by healthcare are likely to remain the fastest growing verticals.

Zylog Systems is currently pursuing various new initiatives for growth in the IT services and telecom space. These include:

The Company, being a niche IT services player, has strengthened its offerings and reach through strategic acquisitions made over the past three years. The Company has successfully integrated these acquisitions into its suite of offerings. These acquisitions have helped Zylog penetrate the market deeper and cross-sell its newly-acquired offerings to complementary markets. For example: acquisition of UK-based Anados Software gave Zylog an end-to-end insurance solution, while that of Ducont and Brainhunter marked its foray into the Middle-Eastern and Canadian markets, respectively. Ducont, which was acquired in September 2008 for $ 7.5 million, resulted in increase of revenues from Rs. 609.09 in FY 2008 to Rs. 751.04 million in FY 2009. In addition, Ducont has made ~ 40 % contribution in gross margin of Zylog. The Company is successfully leveraging cross-selling opportunities to grow size of business per customer and is in the process of strengthening its competitive position.

On 18 October 2012, Zylog opened for trading at a price of Rs. 299 per share. A month later (i.e. 10 November 2012) the stock was trading at Rs. 68. A 77% decline in a month. The stock touched a 52-week high of Rs. 340 on 9 July 2012 and a 52-week low of Rs.37 on 4 Feb 2013, showcasing an extremely volatile stage for the stock. While there were different opinions regarding this selloff, the drop had eroded much of the Company’s market capitalization. A group of financial intermediaries had claimed that certain financial institution had sold a large number of shares pledged by the promoters which resulted in this spike down. However, the Company had (at that time) denied selling of any pledged shares.

Since then the share price has dropped further and is currently trading at Rs. 8.70.

No Promoters left in the Company

The Company faces concentration risk as it derives a majority of its revenue in the United States. 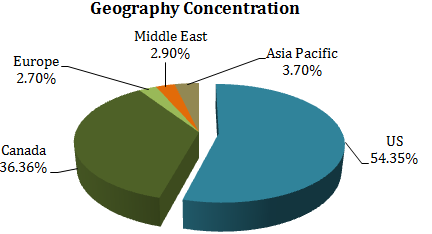 Recently, offshore outsourcing has been the subject of intense political debate and has come under increased government scrutiny within the United States. The United States government is actively considering implementing restrictions on outsourcing to offshore IT service providers. Any changes to existing laws in the United States or in other countries where the Company operates or the enactment of new legislation restricting offshore outsourcing may adversely impact its business and profitability. In addition, any change in the consumption pattern in these markets whether by political or economic events could potentially affect the results of the Company.

The increasing attractiveness of the global delivery model is making overseas players to expand their base in India. In future, Zylog is likely to face competition from firms establishing and building their offshore presence in India due to India’s competitive advantages in terms of lower personnel costs and the availability of skilled IT professionals.

** The stock analysis of Zylog Systems including the financial analysis report linked above, is for information purpose only.  This analysis should not be taken as a buy/sell recommendation. The circumstances of the company and the economic environment may have changed since the date of this stock analysis. Click the link for an updated list of the small cap companies in India.