How CDSL Stock has Benefitted from Strong Rally in Stock Market Central Depository Services Limited (“CDSL” or the “Company”) is the leading securities depository in India. The company offers dematerialization service for a wide range of securities including equity shares, preference shares, mutual fund units, debt instruments, government securities. The Company has a market share of 58%.

CDSL maintains and services 5 Cr. Demat accounts of Investors or Beneficial Owners (BOs) spread across India. These BOs are serviced by CDSL’s 580+ Depository Participants (DPs) from over 20,500 locations.

The Company has also set up CDSL Ventures Limited – the 1st and largest KYC Registration Agency (KRA) in the country with over 3 crore KYC records. The KRA enables a KYC compliant investor to avoid duplication of KYC process while opening an account for the purpose of trading / investment through multiple intermediaries in the securities market. CVL also provides eKYC and is registered as AUA/KUA with UIDAI.

On 26th November 2021, the Company announced that it is the first depository to hold Five crore plus (50 million plus) active demat accounts. 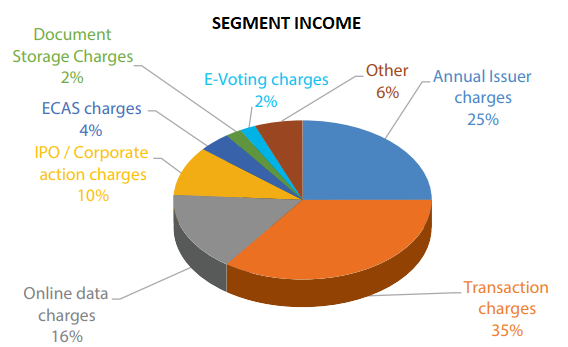 National Securities Depository Limited (“NSDL” or the “Company”) is India’s first and largest securities depository. with an overwhelmingly high market share of 89% in terms of custody value of dematerialized securities in Indian capital markets. The business of the Company mainly consists of depository operations and allied services.

It has played a key role in transforming the Indian securities market by facilitating holding and settlement of securities in dematerialised form. NSDL demat accounts are located in more than 99% of pin codes in the country reflecting the wide reach of NSDL depository.  The Company has a market share of 42%.

As part of digital initiatives, NSDL has launched API / Technical Integration interface between the Participants and NSDL for opening NSDL Demat Accounts, Demat Gateway for providing to brokers mandate for delivery instructions and Margin pledge instruction for margin requirements.