Investing in Gold – Good or a Bad investment option?

. . . . . . “In addition to fixed income and equity investments, there is a lot of buzz about investing in gold and property. The first has some merit but the latter, in my view is unlikely to sustain its rising price in the long run. In any event, when you compare gold vs. other productive categories of investments such as equities, you will realize that equities have consistently outperformed.

What then is the reason for all this hype with the yellow metal? Was it just that people wondered where to put their savings with the equity markets (and mutual funds) performing so poorly over the recent years? Or is it something else? Will gold also see an equity market like crash?”. . . . .

Then 13 months back in October of 2013, I tried convincing a friend about the merits of equity investing and why he should stay away from investing in gold. After probing to some degree, I have to say that I am unsure if I was able to convince him back then. Let me reproduce the entire chat transcript from back then, verbatim (from messenger):

To come back to the central thrust of the above discussion:

What Does Gold Achieve to be Priced so High? 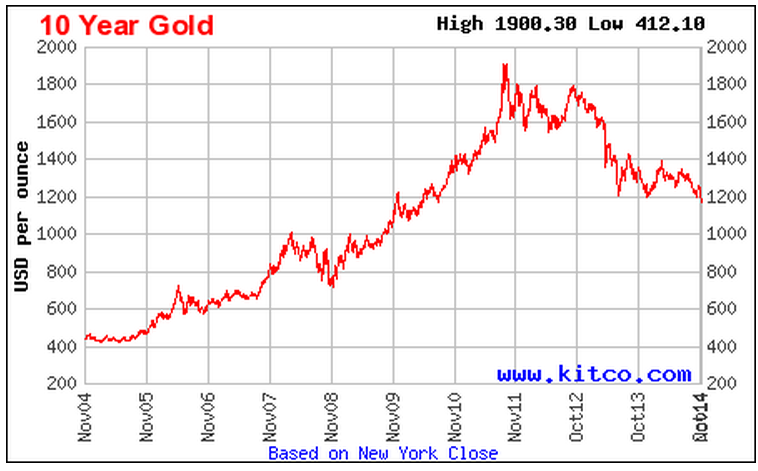 One plausible explanation is that it is used as jewelry. In that case it is going to be expensive only so long as people do not fall in love with another metal. The truth is that in past gold served as the reserve currency, meaning that the amount of money printed and in circulation had to be in proportion to the amount of gold available. That concept was phased of completely in 1971 when U.S. President Richard Nixon closed the gold convertibility window.

To appreciate the topic better, I highly recommend that you read the linked articles here for a more detailed discussion on – how the use of gold started and on gold becoming the reserve currency.

But habits are difficult to change. Somehow, old timers (including my parents) still believe that if all hell were to break loose, i.e. in case of a war or in case the economy or world comes to an end, the only thing that will have any value left will be gold and so it is important to stay invested in gold at all times.

If a calamity hits us now, those who rely on the yellow metal as a security cushion will face ‘double whammy’ cause there will hardly be anyone looking for jewelry at such a time.

When people work hard, they exploit the natural resources available in the world to produce goods and services which are sold for a price.

When you buy equities or fixed income products, that money is ultimately employed in business where people are paid to produce goods and services. In this scenario, you make money in the form of appreciation in share price or as interest income.

When you buy gold . . . . it sits in your cupboard, or in a locker, and does nothing. Yet you hope that a metal sitting in our cupboards will make you rich. This has been the norm for over 4 decades now.

Gold prices have come down by over 21% over the last ~ 2 years. From Rs. 32,000/ 10 gram to Rs. 25,300/ 10 gram. Now, it may well be that gold recovers and starts trading higher again in the near future. No one can predict the short term price movements which are determined more by the sentiment of traders as opposed to the fundamental value of an asset class. One thing is for certain, investing in gold will give you negative returns over the next 5-10 years. Below chart is a free hand sketch on how things might turn out for gold over the next decade. This is just my view, which of course puts me in a super minority particularly given the fact that the cost of getting gold out from the earth is higher than what I claim it will trade at in a decade from now (also see note at the end of this article).

How much could it correct?

Note: Some have (personally) argued with me that a collapse below Rs. 22,000 / 10 gram is not possible because the very cost price of gold is higher than that, i.e. it costs on average more than Rs. 22,000 to extract per 10 gram of gold out of the earth.

2 things need to be kept in mind before you buy into any such absurd logic. First, as of November 7, 2014, the excavation cost is anywhere between Rs. 12,000 – Rs. 18,000 per 10 gram. It depends on extraction technology and more importantly upon the location of extraction. Price being cheapest in the United States and most in the Asian region. This is just an approximation based on averaging of bulk ore extraction cost to 10 gram gold.

Second and more importantly, let’s assume that I am wrong and that the extraction cost is in fact far higher.

Is that not an even more worrying fact given that the problem is one of decreasing demand?

In this case I am confused – something for which the demand is declining is soon going to sell for a price higher than its cost. Should people keep buying gold just because it costs a lot??

Have there been no industries in past that have declined because of a lack of demand and high input costs? If you believe in this ‘high cost price theory’ – Run, the crash will be far bigger than anything that you have ever witnessed before.